My Early Experience with the Cosmic or Integral Consciousness Movement 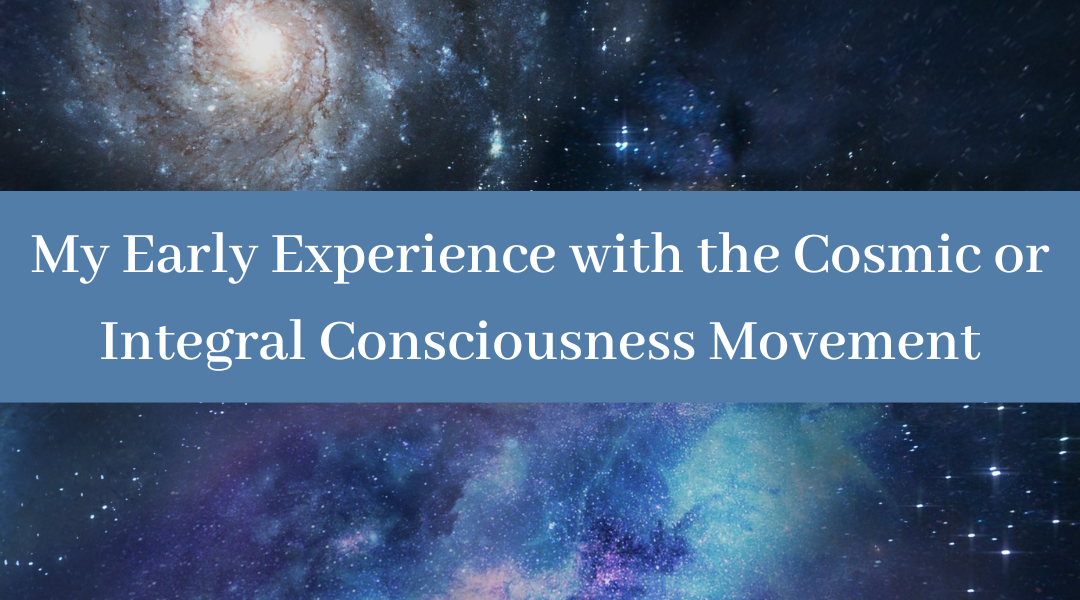 There is exciting understanding coming into our consciousness about what many people call ‘Our New Creation Story.’  The talk is about the film footage coming across our television screens from the James Webb Space Telescope this past summer. The talk is about elementary particles, flashing then fluttering into existence out of a realm of nothingness. We are talking about the attraction called allurement between particles, which can also be waves. We are amazed that fluctuations give rise to the formation of atoms, which then come together as stars which then create all the elements of the universe and release them. We wonder at the meaning and implications of the words ‘radiance’ and ‘allurement.’ We wonder how we can participate in interrelationship with our fellow earth community of brothers and sisters.

Do you remember or know about the song Joni Mitchell sang at Woodstock :

‘We are stardust, billion year old carbon… We’ve got to get ourselves back to the garden?’

In the mid 1980s, I and my friend and seminary classmate, Valerie, attended two summer workshops over a period of a very few years, at what was then the Roman Catholic Passionist Retreat Center at Port Burwell on Lake Erie. Cosmologist, Brian Swimme, Theologian, Thomas Berry and then Dominican priest, Matthew Fox, gave talks over a week-end. These three eminent thinkers and leaders were there just hanging out with each other and also with some people lucky enough to know about them.

I was one of the lucky persons. My husband and our family lived in North York, Toronto, a few blocks from the Passionist Centre there which was called ‘The Centre for Creative Ministries.’ Port Burwell is just down the road a few miles from our family summer cottage at Port Stanly. The Centre was sold to a private family a few years later. When my friend and I were there, the group all ate our meals together, no more than 35 people. The sleeping accommodations were separate small cottages spread out over the sandy landscape.

My wonderful spiritual director for many years, Eldon Shields, and his wife, Marcella, worked out of ‘The Centre for Creative Ministries’ in North York. Through an enormous stroke of Grace, Valerie and I were welcomed into the group those two weekends.

All three of the presenters at those workshops have been major contributors to the movement towards ‘Ecological Consciousness,’ which Brian Swimme calls ‘Integral Consciousness.’ He and others say that we are in the process of waking up to ‘Cosmic Consciousness.’

All three of these leaders are writers contributing to the growth of our understanding of ‘The Cosmic or Integral Consciousness Movement.’ Here is a list of the most recent of their books which I have read and recommend heartily:

In my book, Poems for the Journey, 2021, the little poem, ‘Waves,’ on pages 13,14, uses some of the words of Particle Physics in a playful way. I hope you enjoy the poem.