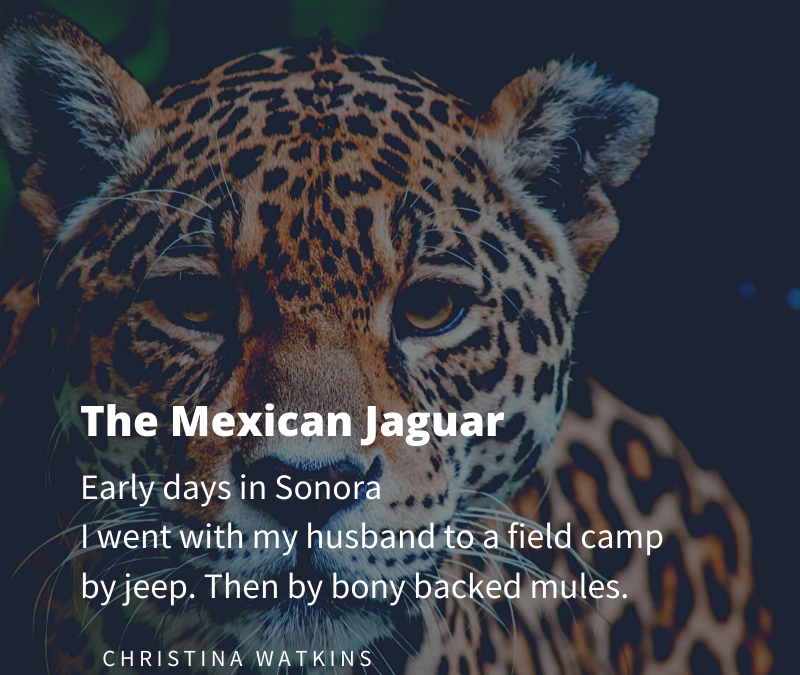 That night the Mexicans stayed up late talking.
In the morning the second dog was gone.
In spite of anxious warnings from the Mexicans
I stayed in camp reading by the river.
After lunch — to the relief of the Mexicans –
my husband and I went back to our town
by bony backed mules and jeep.

Years later– in Arizona
at Tucson’s Desert Museum
we saw a sign saying Onca
and turned a corner towards it.
Suddenly we were face to face
with a brown, black and gold Painted Jaguar
huge and confident looking.
I felt my full foolishness.

The Mexicans in that long ago camp
had been good men who wanted me safe —
in spite of my arrogance
my ignorance and lack of good sense.

After that incident
all the time I lived in that region—
teaching at the convent school
buying chickens in the market
making friends with Mexicans
adopting a street dog
feeding carrots to burros
through the bars on my windows–
I had a reputation
for a kind of bravery.
But It was really about my luck –
that I was prayed for and protected.

As for me now, I am thankful
for those men and their prayers.